RSS Feeds
December 9, 2016
Share to FacebookShare to TwitterShare to LinkedInShare to PinterestShare to EmailPrint this page
RSS Feeds
Biomedical Engineers 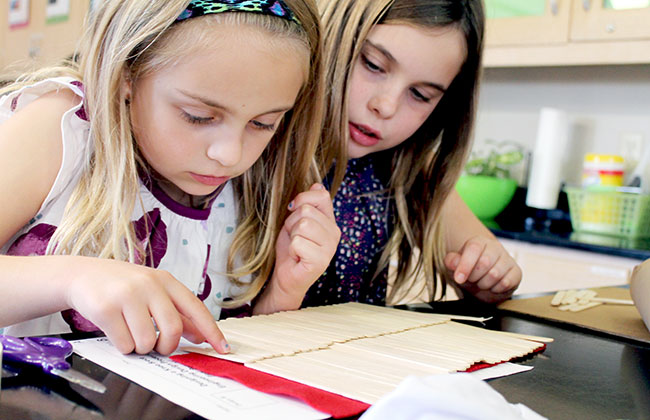 The popsicle sticks give structure to the knee brace under construction.

“How does your knee work? Can your leg bend backward? Can it bend forward? How about side to side?” Science teacher Sharon Anibal began a second grade biomedical engineering challenge to design a knee brace with research on how the knee works.

Actually, as a prelude, Forsyth second graders first researched the arches of their feet to determine what type of soles work best in athletic shoes – an exercise in bioengineering. They also had a visit from Professor Jon Silva, a biomedical engineer at Washington University, who talked about types of engineering careers and brought high tech holographic headsets designed to help surgeons for second graders to try on. 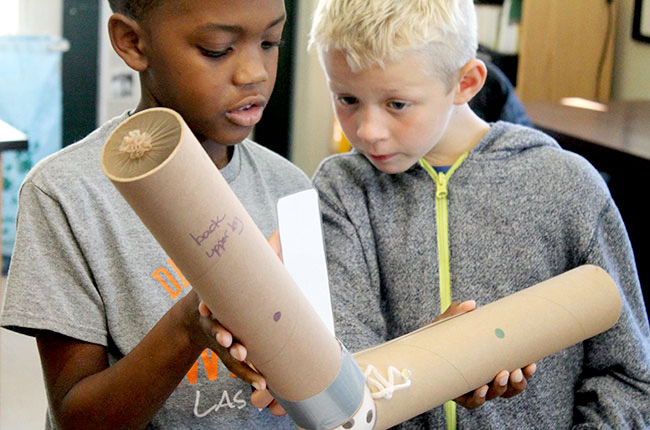 Researching the range of motion on the injured leg model by measuring the bend with a goniometer.

ASK. How does a healthy knee work? To start, second graders researched the motion of a healthy leg. They used goniometers to measure the range of motion as their legs bent backward to see how far the leg could bend. Then, they measured the range of motion of an injured leg model to compare that data to the healthy leg and discussed the differences. 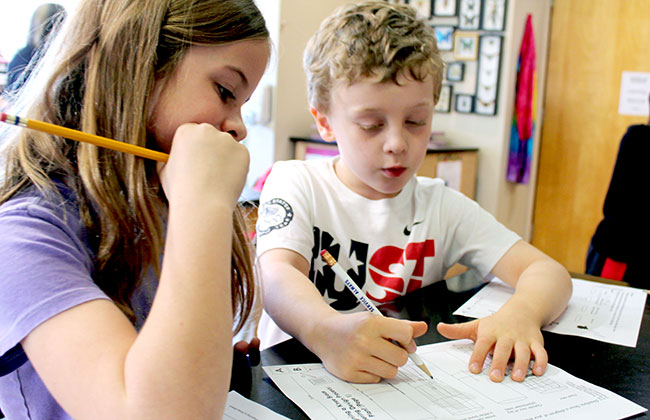 Teams made written plans that were reviewed and approved by Mrs. Anibal before construction began.

IMAGINE by Yourself & PLAN with your Team. The goal is to design a knee brace to support an injured knee that allows the knee to move as a healthy knee would. So, the knee brace would not allow the leg to move side to side or bend forward. Each team of second graders was given an injured knee model to work with. They began by making notes about their ideas individually, and then as teams they brainstormed and collaborated on which ideas might work. When the team had written plans, the kids reviewed them with Mrs. Anibal and discussed materials they would need to execute the plan. Each team was given a tub into which they put the materials they requisitioned for construction of their knee brace. 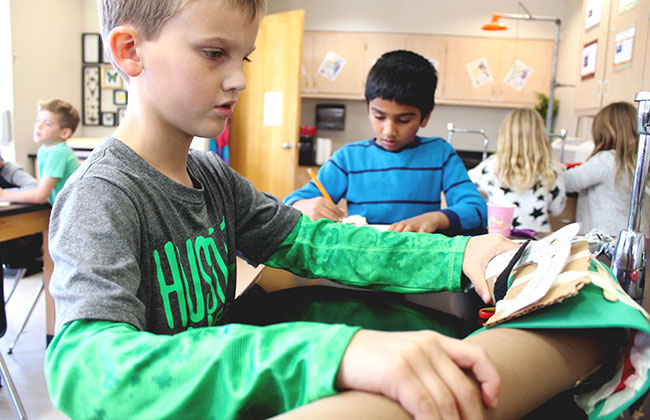 This student has the knee brace on the injured leg and is measuring range of motion with a goniometer.

CREATE. Popsicle sticks, felt, lots of tape, elastic bands, and Velcro were materials used in the knee braces, and each knee brace was different. Teams discussed, built, tested braces on their own legs, and tested them on the injured leg model. Mrs. Anibal made the rounds to discuss knee braces in progress and ask questions at each stage. Testing was an integral part of the build process. As the braces progressed, they were applied to the injured leg model to determine whether the brace was going to work effectively. 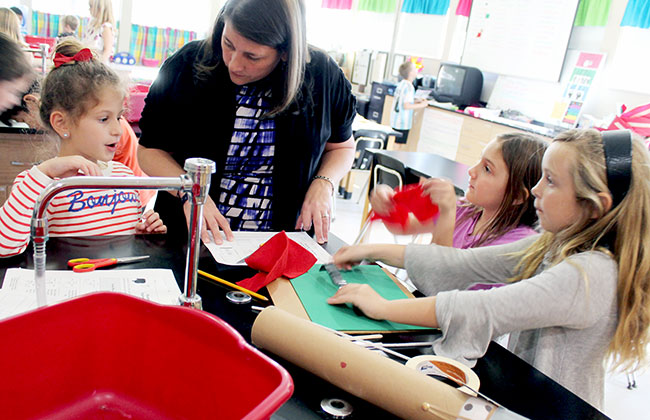 Mrs. Anibal checks in on work in progress. These girls were the first team to develop a working knee brace.

Test & IMPROVE. The first team to complete a knee brace was a team of 3 girls who successfully designed a brace that allowed the correct range of leg movement. They were ecstatic. One by one, teams completed their leg braces, and because of the ongoing testing during the build process, the second graders developed successful knee braces. At completion, each team explained their brace, demonstrated on the injured leg model and reflected on design improvements. 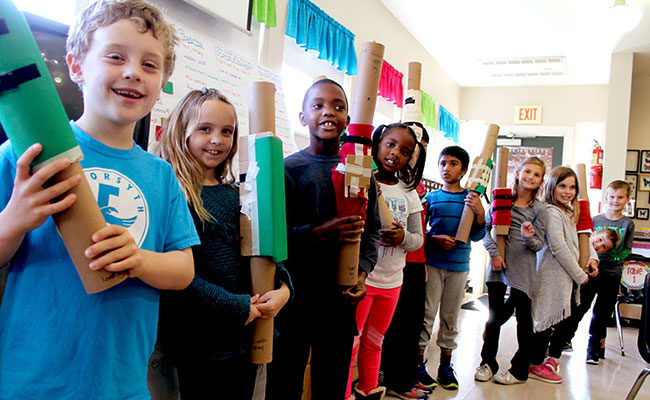 They may not look like it, but those cardboard tubes are injured leg models with their knee braces in place.