RSS Feeds
September 7, 2015
Share to FacebookShare to TwitterShare to Google+Share to LinkedInShare to PinterestShare to EmailPrint this page
RSS Feeds
Introducing Freddy Falcon! 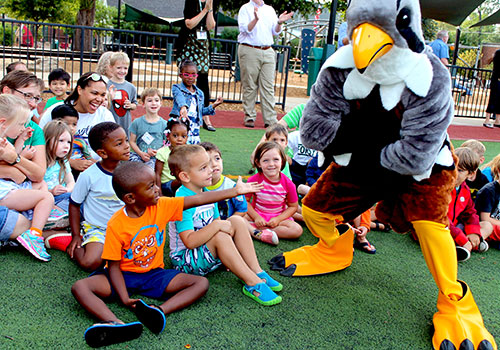 Opening Assembly officially kicks off the new school year at Forsyth.  On August 28, the entire school–Pre-K – Grade 6, faculty and staff–gathered on Falcon Field to welcome each other back to school and to celebrate the sixth graders who will finish their Forsyth careers in the next nine months. Head of School Mr. Vachow saluted new students, introduced new faculty, and then the sixth graders introduced themselves one-by-one and signed their Class of 2016 banner.

>> See a slide show of Opening Assembly.
>> Click the X graphic in the media player to view larger images. All photos are downloadable.

After the sixth graders signed their banner, a large bird (think Fred Bird or Rampage) emerged from 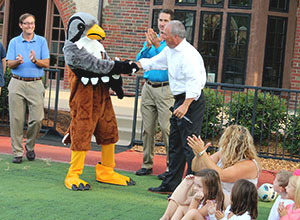 the library. Grade 6 teacher Mr. Paradise introduced Freddy Falcon, our new School mascot, and noted that he is a gift of the Class of 2015.  “Remember all those donuts, we ate last year at sixth grade donut sales?  Those sales raised the money for our new mascot,” Mr. Paradise explained. After shaking hands with Mr. Vachow, Freddy Falcon made his way around Falcon Field several times, high fiving and high jinxing, to the delight of Forsyth students of all ages. Big thanks to the Forsyth Class of 2015 for amping up School spirit with this new mascot. Freddy Falcon is a big hit!