RSS Feeds
April 27, 2018
Share to FacebookShare to TwitterShare to LinkedInShare to PinterestShare to EmailPrint this page
RSS Feeds
Spring Chickens 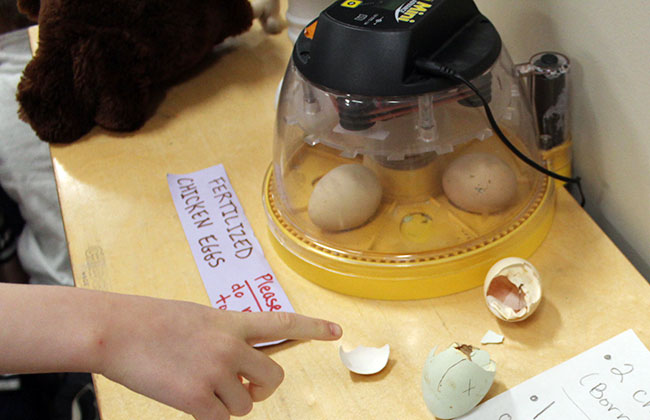 Our Forsyth Fillmore house chicks...the 3, 4 and 5-year-old pre-kindergartner and junior-kindergarten students...are seeing and experiencing the life cycle of chickens firsthand this April and May down on the Forsyth Farm! Chickens inside of eggs and inside the coop have become a part of the daily curriculum in science, math, language arts and art. 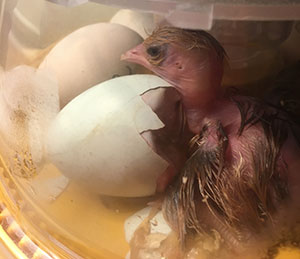 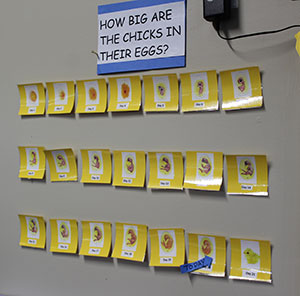 Children spent days monitoring multi-colored eggs in three different incubators in Pre-K, Jr-K and in the Early Childhood Science classroom. It was a 21-day countdown with great anticipation for the chicks to peck their way out into the world. In the meantime, students learned all about eggs in morning meeting and during story time....where do they come from? Why are they different-colored?

In art, junior-kindergarteners created their interpretations of the lifecycle of a chicken from egg to the cracking of an egg to a full –sized chicken. They observed and created drawings of each stage. The first chick, Uno, was born early on Day 19, which ironically was Earth Day. Newly hatched chicks were moved from the incubator to the brooder box where students can get a birds-eye view of the classroom newborns. The chicks will spend the rest of their time at Forsyth in the brooder box under a heat lamp with 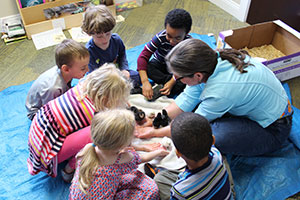 water before they go home to the farm of our early childhood science teacher, Ms. Torlina. The baby chicks are the stars of science class for students in Pre-kindergarten through Grade 2. Students take turns handling them and learning how to care for them.

>> Click here to see a video of chicks hatching in Fillmore House and our early childhood students welcoming them to the world.

From eggs to adults...meet Cinnamon and Oreo! Cinnamon is a Cinnamon Queen chicken and Oreo is a Barred Rock chicken. They moved into Forsyth right after spring break and live in a coop in the butterfly garden. All year, junior-kindergarteners have been studying different habitats and now they get to be the habitat helpers. Two farm hands are chosen daily to help their teacher, Mrs. Byrd, clean the coop, feed the chickens, give them water, add bedding and collect the eggs. In math, Junior-Kers are tracking the number of eggs laid daily and also collaborated on a voting contest to name the chickens.

Around lunch, Cinnamon and Oreo stretch their wings and wander around the playground. Students are allowed to pet the chickens in the direction of their feathers and under the direction of a teacher. 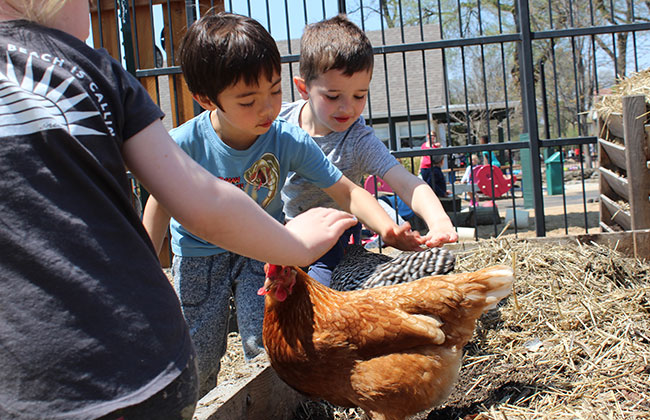 Mrs. Byrd says the best thing about having the chickens on campus is teaching our 3, 4 and 5—year-olds how to care for other living creatures. Seeing the life cycle in action and caring for chickens in the middle of our urban campus is a memorable and meaningful experience.